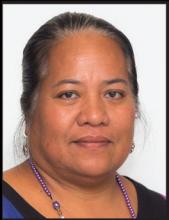 FSM Telecommunications Corporation (FSMTC) announced on September 22, 2020, that Athena Hainrick is the new Vice President of Administration, Marketing and Customer Care Department. “This is a major milestone for the corporation as Mrs. Hainrick is the first woman to hold an executive managerial position at FSMTC,” stated President/CEO Fredy Perman.
Athena joined the corporation on November 1987 as a Service Order Coordinator and eventually became the Chief Operator in 2009. She held this position for 11 years and helped with the successful implementation of a Call Center.
In the past few months Athena has been in the acting capacity as Vice President and “has proven to be very productive and effective in this position,” said Fredy.
"Her wealth of experience in the company is a testimony of her dedication to our continuing success. I am confident she will do a great job to lead the department as we face new challenges ahead of us,” added Fredy.
With her new position as VP, Athena has reorganized the department to include divisional managers as follows: under Administration, we have Facilities and Maintenance Manager Andy Legaspi and Personnel Manager Wanida Saimon;  under Customer Care, we have Customer Service Manager Steezia Aldis and Billing and Service Order Manager Gloria Danis; and under Marketing, we have Pamela Joseph as Marketing and Sales Manager and Steincia Olter as Carrier and International Business Manager.

FSMTC congratulates VP Athena and all divisional managers under this department.